Today we will look at a case study, in which we applied Ematik Ready to treat a surgical wound from the removal of a tumor mass.
Treating a large wound can become complicated when there is a lack of tissue that makes flap suturing impossible. Stressing the tissue by trying to bring the sides of the wound closer together may lead to reopening of the wound or dehiscence.

In a previous article we talked about Ematik Ready, a resorbable patch that makes up for the lack of tissue and facilitates wound healing because it is PRP-based. Its structure allows it to be sutured directly to the wound edges.
For the preparation of PRP, please refer to this article. Here we would just like to remind you that Ematik Ready uses a protocol of double centrifugation of the blood and resuspension of the platelets in a reduced quantity of plasma (6 ml).
This week with Dr Bertaglia of the Santa Teresa Veterinary Clinic in Cavezzo (MO) we treated a case of a wound from the surgical removal of a tumor mass, applying the Ematik Ready patch.

Anamnesis - how to treat a surgical wound from removal of tumour mass.

The patient is a Labrador crossbreed weighing approximately 25 kg and had a surgically removed mass. The resulting wound is located at the level of the right front paw and was initially closed with stitches.
Due to the tension of the stitches because of the anatomical position of the lesion and the reduced regenerative capacity of the underlying tissue, the wound suffered dehiscence, with reopening of the stitches and infection.
The infection was cleared with antibiotic therapy, but the wound remains open with lax flaps measuring approximately 11.8 cm (L) by 4 cm (W), and the wound area is approximately 38 cm2 (measurements obtained using the Imito Measure application for wound size follow-up). 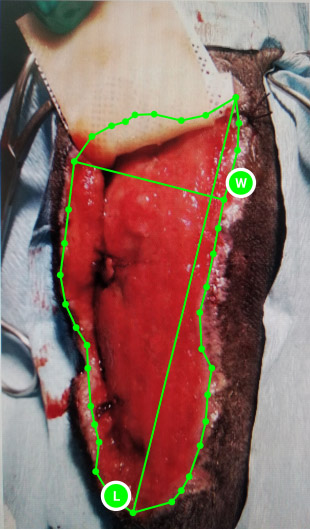 Ematik Ready - treat a surgical wound from removal of a tumor mass. 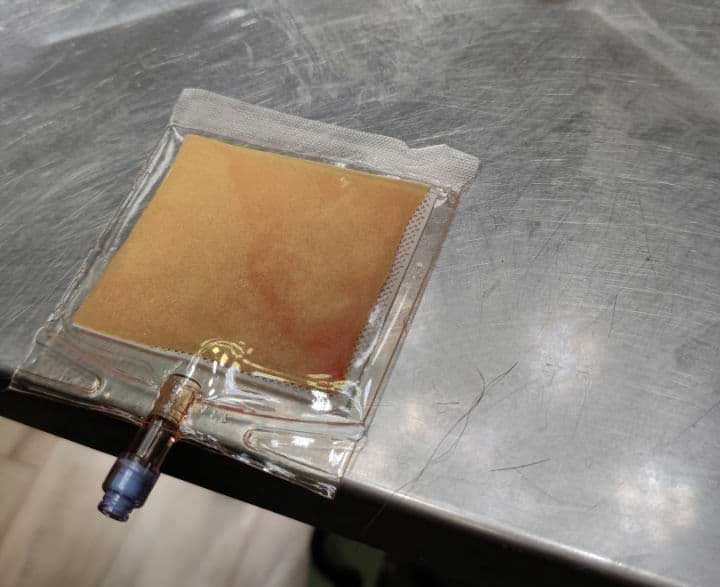 At this point the patient was sedated, the hair around the wound was shaved and a surgical debridement was performed to remove the overlying tissue and to reactivate the lesion .
Given the elongated shape of the wound, it was decided to cut the patch to cover the entire surface, applying 2 strips.
The patch was applied leaving the support (the biopolymer mesh) towards the external side, suturing the skin flaps with the mesh of the patch. Where possible, the patch was inserted under the skin and stitches were then applied.
The part was then bandaged using a breathable bandage made of cotton, polyamide and viscose, applying a semi-compressive and breathable bandage.

The patient was maintained with an Elizabethan collar until day 5, whene it was unravelled to check the state of absorption of the patch and the condition of the wound.

wound on day 5 after application

The wound was debrided and any residual patch not absorbed was removed by gently cleaning the wound with saline solution. The wound currently shows a good state of granulation, a sign of tissue reactivation, with good pink margins. The flaps are now more adherent to the wound surfacce. The wound will be rechecked after 5 days.

wound on day 15 after application

As we can see from the photo the wound is remodelling, active tissue is present and there are large margins of re-epithelialisation. The wound area has reduced by 70% compared to the original wound, at the time of the picture it measured 6 x 2.3 cm

wound on day 30 after application

The wound had large margins of re-epithelialisation. The wound area is 87% smaller than day 0. The left flap is now fully adhered to the tissue.

wound on day 60 after application

The lesion is closed, with re-epithelialised and rejoined margins. Regrowth of the hair coat of the same colour as the original.